Youtube star MrBeast has recently started using the Basic Attention Token (BAT) rewards of the Brave browser. This opens this cryptomony to a large audience.

The news was relayed by batgrowth, a service that tracks the adoption of Brave Rewards. The MrBeast Youtubeur currently has 50.2 million subscribers, so that’s how many people could be exposed to the Basic Attention Token (BAT).

MrBeast’s interest in the BAT is not entirely a surprise, the Youtubeur has already published several videos on the theme of cryptography. It is also estimated that a good part of his fortune is due to his investments in cryptos, although the exact amounts are not known. MrBeast’s account being „verified“, he may start receiving tips from his followers. So far, he has not published any content explaining how Brave and BATs work.

The BAT de Brave had a relatively uneventful year in 2020 in terms of prices. In August, however, the altcoin had managed to exceed $0.40, but the soufflé had fallen back, and by the end of the year it had exceeded $0.25 only once. It currently benefits however from the bull run and the enthusiasm which carries the markets of the altcoins.

For the past two days, the BAT rate has been soaring, taking +28% and approaching 0.30 dollar again: 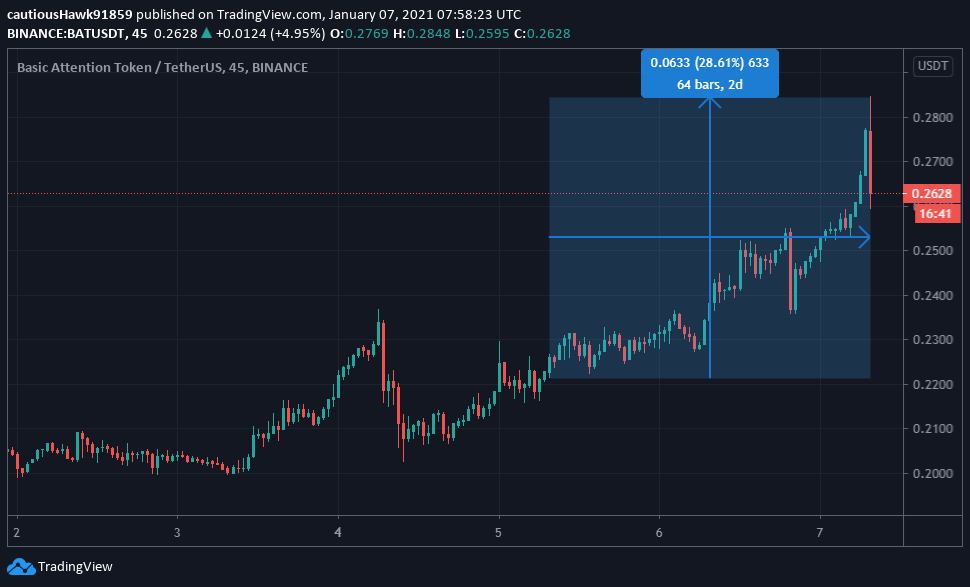 This morning, BAT’s capitalization amounts to $401 million. It should be noted, however, that Brave’s assets are still far from their record level: they had reached $0.95 in January 2018.